Nellie’s story idea to race round the globe faster than Phileas Fogg sat on The New York World newspaper editor’s desk for a year.  Suddenly on 12 November 1889 Nellie was asked if she could start her journey ‘the day after tomorrow.” I can start this minute,” she said. When Nellie first introduced her ’round the world’ feature idea, her editor insisted that ‘only a man’ could do it. Nellie told him to assign a male; but she would take her idea to another paper and win the race. He conceded. In Nellie’s day, no-one would send a young woman to the far corners of the earth without a chaperone. In any case, the numerous trunks required by a female traveller would prevent the speedy connections necessary to win the race.

Nellie took a small satchel (17.8 x 40.6 cms) and wore the same dress throughout the journey. 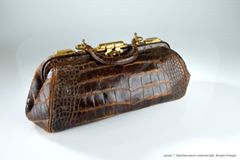 “One never knows the capacity of an ordinary hand satchel until dire necessity completes the exercise of all one’s ingenuity to reduce everything to the smallest possible compass,” she said.

“If one is travelling simply for the sake of travelling, and not for the purpose of impressing one’s fellow passengers, the problem of baggage becomes a very simple one. On one occasion–in Hong Kong when I was asked to an official dinner–I regretted not having an evening dress with me, but the loss of that dinner was a very small matter when compared with the responsibilities and worries I escaped by not having a lot of trunks and boxes to look after.”

She could have packed lighter.

“After, experience showed me that I had taken too much, rather than too little baggage.”

That would require a time-guzzling deviation threatening her success right from the start, not to mention two nights without sleep. She did it.

“Before I had been many minutes in their company, they had won my everlasting respect and devotion,” Nellie said of Jules Verne and his wife Honorine.

The feeling was mutual. Nellie’s visit lives on today in photos and references found in their home, Maison Jules Verne, now a first-rate museum attracting visitors from around the world. You can see where she had tea with the Vernes and view his study, just as it was when Nellie visited. Believe in humanity Nellie was encouraged to carry a revolver on her travel for protection. She refused.

“I had such a strong belief in the world greeting me as I greeted it that I refused to arm myself.”

When encouraged to use a cane to ‘keep off the beggars’ in Port Said, Egypt, Nellie refused all offers to accept one saying “a stick beats more ugliness into a person than it beat out.” But keep your distance Nellie narrowly escaped death in the South China Sea from a love-sick passenger planning to take her in his arms and jump overboard so they could drift away and drown ‘in peaceful slumber.’ Hurry up and wait  Nellie was delayed five days in Colombo, Ceylon (Sri Lanka). She tempered her intense frustration with sightseeing during the day and balmy evenings at splendid Colonial hotels like the Grand Oriental Hotel that still delight guests. Lounging on the veranda at The Galle Face Hotel, Nellie reflected:

“while listening to the music of the wave, the deep, mellow roar can drift–drift out on dreams that bring what life has failed to give; soothing pictures of the imagination that blot out for a moment the stern disappointment of reality.”

Nellie acquired a monkey in Singapore that she named McGinty.  McGinty travelled half-way round the world with Nellie, causing chaos on board; and later in her home.

Make friends along the way

“To so many people this wide world over am I indebted for kindnesses that I cannot thank them all individually. They form a chain around the earth,” said Nellie. “Every kind act and thought, if but an unuttered wish, a cheer, a tiny flower, is imbedded in my memory as one of the pleasantest things of my novel tour.”