Typhoon Kalmaegi at peak intensity when I was leaving Hong Kong. WIKIPEDIA

Typhoon,  or no typhoon,  I had to get to Canton. It was one of the most exotic stops on Nellie’s world tour and the place where she spent Christmas Day. Besides, I invested time, money and untold stress to get a visa for mainland China. In any case, I would’ve been homeless in Hong Kong because there was no room for another night at the ‘inn’ – the heartless Bishop Lei International House in the business district Wan Chai.

Nellie travelled up the Pearl River by boat to Canton. Not a good idea during a typhoon so I chose the train.

The roaring winds and thrashing rain of typhoon Kalmaegi actually cleared the way for my journey to China’s third largest city.

On track for Canton

Officially shut down, Hong Kong was deserted and so was Hung Hom train station across Victoria Bay. No queue to buy tickets and before I knew it I was aboard a luxurious train, seated beside a dapper Cathay Pacific flight attendant, awaiting breakfast.

I was ready to congratulate myself for prevailing over the typhoon when I spotted my seatmate Wesley’s travel bag. It was the spitting image of the small ‘gripsack’ that Nellie Bly carried around the world! Honest. Even Wesley was astonished when I showed him a photograph of Nellie’s bag.

This wasn’t to be the only time that Nellie joined me in Canton, the most challenging of all my destinations.

Canton – officially Guangzhou – totally enthralled Nellie, and me. In the spirit of  Nellie’s times, I’m going to call it Canton. Nellie was enticed by Canton’s macabre side – a leper colony, mortuaries and execution grounds that I never located. Whew. Many of Nellie’s destinations have long since disappeared or been re-classified with Communist-approved nomenclature.  And some were restored for the 2010 Asian Games held in Canton. 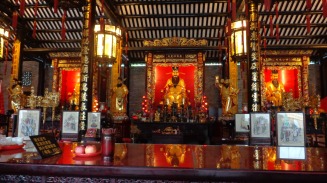 Take the once-abandoned Temple of Horrors, officially the refurbished Cheng Huang Temple. Inside, ferocious, larger-than-life gods — poised to torture devils — bring the nickname alive. They were meant to instil fear and inspire good deeds in this Taoist temple that protects the people of Guangzhou and Guanghong Province. Today, I’m told, the aim is show the beauty of the gods to guide the public towards ‘goodness’. From surrounding urns of fire, worshippers lit hefty bundles of incense wrapped in bright pink paper. Grasping their burning bundles with both hands, they stood before the Gods and bowed from the waist as smoke encircled them.

Nellie’s favourite was the Temple of 500 Arhats, officially Hualin Temple tucked deep inside the vibrant jade market quarter of Canton. Nellie’s golden ‘gods’ are actually arhats or saints that were destroyed in China’s Cultural Revolution, but replaced in the 1990s. Each of the 500 gleaming golden arhats features a different

expression and meaning, and one is said to represent Marco Polo. I found him… eventually.

Tracking these temples required research and perseverance which were equally applied to sites I never found. Most disappointing was the absence of the ‘Temple of Death’ where Nellie ate her Christmas lunch.

I was not alone in my endeavours. The lovely receptionists at Canton’s Customs Hotel were quick to whip out their phones and scour Chinese cyberspace on my behalf. They also wrote in Chinese characters the sites I was seeking so people on the street could point me in the right direction. I couldn’t have done it without them.

Still, we couldn’t pinpoint the ancient bronze water clock that Nellie raved about. Officially known the clepsydra of Canton, it was described as one of the most extraordinary clocks in the world. Dating back to 1316 AD, it once occupied a city axis line at the northern gate pavilion. 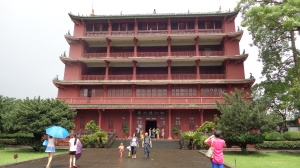 Who would guess what was inside the Zhenhai Tower?

Believing I’d found all that could be found, I headed for Yuexiu Park downtown, particularly striking as light showers brightened foliage, flowers and sculptures and encouraged visitors to unfurl their pretty umbrellas.  When the showers intensified, I ducked inside the green-tiled Zhenhai Tower, built in 1380, and home to relics of Canton’s 2,000 year-old history. The city’s centuries unfold in each of the tower’s five stories. I roamed the top floors to gain context for Nellie’s times — late 19th century. On the way down to earlier eras, I stopped dead in my tracks.

There it was. Nellie’s water clock! Right in front of me in all its ancient glory. Stunned and elated, I had the inexplicable, but very real feeling, that I had been led to it. Nellie once more?

I took photo upon photo trying to avoid the cherry red universal ‘don’t touch’ signs obscuring this almost timeless timepiece. I used gestures to ask the uniformed guard stationed nearby for permission to move them, just for a few seconds. No, came the swift and resolute reply. When she returned to her post,  I quickly moved them anyway. In a split second she was at my side and I was forced to return the signs to their rightful, but annoying, places.

As I continued to photograph the water clock, the guard appeared again at my side. She let me know that she would remove the signs, but I better be quick. The deal was done and I snapped away. I was grateful and she felt good. But not good enough to let me take her photo in front of the water clock.

A sculpture on the ancient bronze water clock that Nellie described.