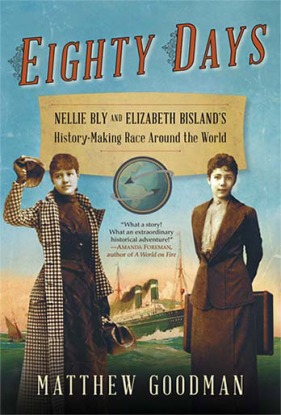 It’s the best of journalism meets The Amazing Race meets Around the World in Eighty Days. Phileas Fogg, move aside. One of the most daring stories in history is that of investigative journalist Elizabeth Jane Cochrane (aka Nellie Bly) who in 1889 decided she would try to beat the fictional record in Jules Verne’s now classic story and go around the world less than 80 days.  At the same time, because competition is the name of the game in journalism, Cosmopolitan sent their own reporter Elizabeth Bisland, out to beat not only the 80-day fictional Phileas Fogg record but also try to one-up Bly who was working for Joseph Pulitzer’s New York World  newspaper.

“We are developing it as a limited show and talking to creators now,” said Zero Gravity’s Marc Holder. “After that, we’ll go to talent. People have tried to explore her story from her days undercover at a woman’s insane asylum, but not many people have tried to delve into this particular story. Goodman just did such a wonderful job with this book. They are both courageous women and this story is really inspiring.”

The race started on November 14, 1889 and each reporter left from New York, but went the opposite way around the world. The story grabbed headlines at the time and enthralled readers who were kept on the edge of the seats as each reporter filed stories about their dramatic and sometimes dangerous adventures. The race spanned over 24,000 miles using railroads and steamships as their main mode of transportation.

Beyond captivating the nation, the lives of both the well-respected journalist Bly and her competitor Bisland were forever changed by the journey. Bly ended up winning the race by four and a half days and set a world record. She had circumnavigated the globe in 72 days.