“I took off my cap and wanted to yell with the crowd, not because I had gone around the world in 72 days, but because I was home again.” 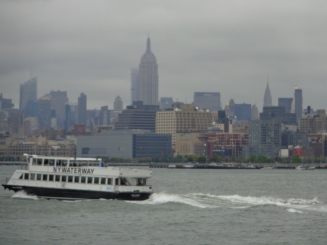 Nellie crossed the Hudson River from Jersey City to Manhattan after winning the world race.

At 3.51 p.m. on 25 January 1890, journalist Nellie Bly completed her epic travels. Her train pulled into Jersey City, just across the Hudson River from Manhattan, signalling the finale of the world journey she completed in  72 days, 6 hours and 11 minutes. She had raced through a ‘man’s world’ –  alone and literally with the clothes on her back — to beat the fictional record set by Jules Verne’s Phileas Fogg. She was said to be the most famous woman in the world that day. After crossing three oceans and four continents, she ended her journey with a ‘flying trip’ by train across America.

“I only remember my trip across the continent as one maze of happy greetings, happy wishes, congratulations, telegrams, fruit, flowers, loud cheers, wild hurrahs, rapid hand-shaking and a beautiful car filled with fragrant flowers attached to a swift engine that was tearing like mad through flower-dotted valley and over snow-tipped mountain on-on-on! It was glorious!” she wrote. 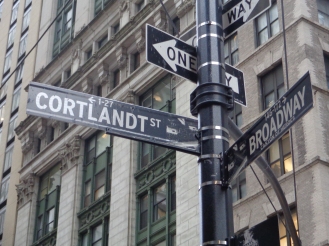 Throngs of people were cheering Nellie Bly as her carriage travelled up Cortlandt Street to Broadway.

At her final destination, Jersey City, “the station was packed with thousands of people and the moment I landed on the platform, one yell went up from them…and the cannons at the Battery and Fort Greene boomed out the news of my arrival,” wrote Nellie. “From Jersey to Jersey is around the world and I am in Jersey now.”

Today she is best known for her record-breaking journey. But even more importantly, Nellie Bly pioneered investigative journalism and paved the way for female reporters.

Let’s pay tribute to the courage and determination of Nellie Bly on the 125th anniversary of the day she stepped off the train in Jersey City … and into history.